Here are the summaries of my books and edited volumes:

Thesis Eleven Special Issue: Empires and Nation-States: Beyond the Dichotomy

Ernest Gellner was a unique scholar whose work covered areas as diverse as social anthropology, analytical philosophy, the sociology of the Islamic world, nationalism, psychoanalysis, East European transformations and kinship structures. Despite this diversity, there is an exceptional degree of unity and coherence in Gellner’s work with his distinctly modernist, rationalist and liberal world-view evident in everything he wrote. His central problematic remains constant: understanding how the modern world came into being and to what extent it is unique relative to all other social forms. Ten years after his death, this book brings together leading social theorists to evaluate the significance of Gellner’s legacy and to re-examine his central concerns. It corrects many misunderstandings and critically engages with Gellner’s legacy to provide a cutting edge contribution to understanding our contemporary post-9/11, global, late modern, social condition.

‘These lively critical essays reflect the remarkable range of Ernest Gellner’s scholarship. Even when they disagree with his answers, the authors testify to the importance of the Gellnerian questions and the enduring legacy of his approaches.’ Chris Hann, Max Planck Institute for Social Anthropology

‘This is a very exciting volume, on two chief counts. First, it affords its readers the privilege of having a number of established scholars assist them in their own encounter with the vast and diverse body of work produced by Ernest Gellner. The contributors identify the main themes of that work and describe and evaluate Gellner’s own interpretations of those themes, among which are the peculiarities of the West, the significance of nationalism, the nature of social power, the historical careers of Islam and of Marxism. Second, the authors have taken the opportunity to outline and extend their own understanding of these themes, an understanding grounded in each case on original research. In doing so they not only expound Gellner’s contributions but criticise them; however, one has the sensation that Gellner himself, were he still alive, would both appreciate those critiques and confront them in his own inimitable manner.’ Gianfranco Poggi, Professor of Sociology, University of Trento

‘This is an excellent book. It shows a great appreciation of Ernest Gellner’s contribution to social thinking and also offers a critical assessment of this thinking in the context of social and intellectual developments since his death. … Ernest Gellner and Contemporary Social Thought is a valuable addition to the libraries of all serious scholars of contemporary society.’ Nations and Nationalism

Ideology is a hotly disputed term in social and political theory. It continues to generate intellectual dispute more than 200 years after its birth in the fervour of the French Revolution. Most recently, post-structuralists such as Foucault and Deleuze launched a strident critique claiming that “there is no such thing as ideology”, creating a theoretical environment which polarises critical opinion either for or against ideology.  Ideology after Poststructuralism aims to end this culture of antagonism by bringing together leading scholars in the field to establish a dialogue between post-structuralism and ideology critique. For the post-structuralists there is a need to generate a sensitive account of ideology so as to bolster their claim that they have a significant contribution to make to social and political criticism. For the ideology theorists there is a need to engage with the post-structuralist critique of ideology without taking the assumptions that post-structuralists have so thoroughly criticised. The essays in this book show how the intellectual posturing of recent decades has closed off debate to the detriment of both post-structuralism and ideology critique. 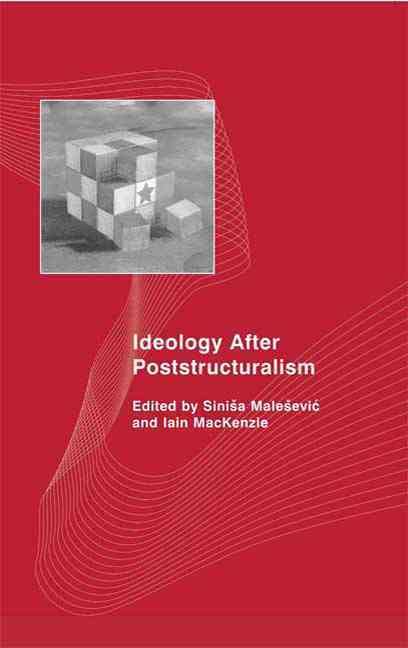